At #Trulondon I ran a track at the close of the event on using twitter as a recruiter or sourcer. This isn’t about engagement. conversation or any of that good stuff. Engagement has its place, as does investing time in building networks. At the same time, I understand those recruiters who tell me they don’t have time for community building or long term relationships. The participants in the track asked for a list of some of the tools I was talking about, hence this post.
Glen Cathey, the boolean black belt, has long talked about just in time sourcing as the most effective way to hire. Catheys argument is that recruiters are better off being able to find people to fit open vacancies, speaking to them about the opportunity when the post is open, rather than building relationships in the hope of an opening in the future. I understand Glens view-point, and I can see how it would resonate with the busy recruiter.

Recently I’ve been working with corporate recruiters on the most effective way for them to use twitter as a sourcing channel. There are people from virtually every discipline on twitter, and it’s the easiest place to effect an introduction with a stranger. What the recruiters have difficulty with is finding the time to build up the networks to identify who to speak to and when. There are tools that can assist with this and help to identify people by discipline, location or any criteria you want to apply. It’s about organising people so that you can pinpoint who you want to approach, and to identify who to offer opportunities to.

For me this starts with Tweetdeck, although most of the client servers work in much the same way. You can set up columns in tweetdeck to display content from twitter lists or twitter accounts, and it’s the lists that enable you to segment groups so that you can drill down in to them when you need to. Theres some great applications that simplify the process.

My favourite application at the moment is SocialBro. It’s better known for twitter analytic s, but its the search and listing features that are most useful. This means you can search all of twitter either by bio or tweet content to identify accounts and add to lists with one click. The best way to search in open stream is by “geek words”. identifying those words that people of a certain discipline will tweet or have in their bio. It’s very accurate, and you can factor in location, employer or other areas that are of interest. Set the list up. Set the column in tweetdeck according to list name. Add the accounts to the list as you want them. It’s very simple, and there’s plenty of other features in SocialBro for your own accounts that give you brilliant analytics. My number 1 tool.

As an added bonus, you can create lists for people who follow specific accounts. A good use of this feature is listing everyone who follows competitor job feeds or recruiter accounts. An easy way to snoop around and check who might be right for you. It’s available as a chrome extension to, so totally portable 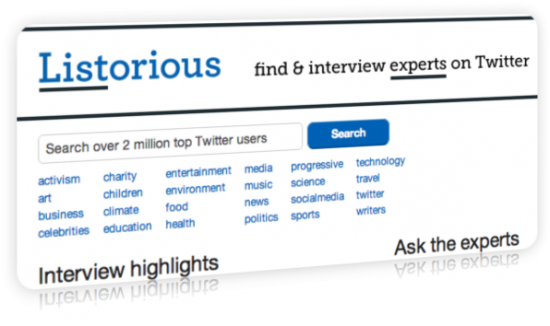 To find effective lists that have already been built  by others, listorious provides a searchable index of twitter lists, and the people who appear on the most lists under any topic. Again you can search by geek word or discipline. You can also search for lists or listed against individual accounts. If you can search for most listed, then add their lists, you can build columns for the lists and connect with anyone relevant from your target list. Another good one to play around and figure out how you can implement it.

List.ly is a list builder. The function I’ve used for with surprisingly good results is the crowd sourced list builder. This works by building a base list, for example C++ programmers. The names on the list receive a tweet inviting them to add names to the list that they know. People like being listed. It’s a vote of confidence from others, and they like to nominate friends by giving the vote, and you even get extra names from the stream. Give it a go. It’s simple and takes minutes.

One of my favourite applications used to be hashblaster, that enabled me to follow anyone on using a hashtag. This dropped out of use about 18 months ago, and nothing before Twitter Massive follower has filled the gap untill now. I found this one in the Chrome store and I’ve just started using it. So far so good.

This application allows you to conduct a twitter search using any criteria you want including hashtags, and follow them all with one click. The way I use this is to set up twitter accounts for different disciplines under different names. The bio on each states quite clearly that it is a recruiter account, so there is no deception. 50% of accounts will automatically follow you back, so you can D.M. at least half the people you follow. Whenever you have an opening in that discipline you have a following list to search. Having dedicated accounts also means you can share jobs with a targeted audience, and targeted content around the discipline. To follow multiple twitter accounts by in tweetdeck create a twitter list for people this account follow and build tweetdeck columns for the lists.

Followerwonk is an application that enables you to search bios and find people to follow by keywords or keyword combinations. This is great for building the accounts by discipline. The basic free version gives you the basic functions on one account, so you get the chance to try it out, but to get the real benefit you need the paid for option. Pricing starts at $40 a month, which gives enough functionality and credits for most recruiters, and you can use it for multiple accounts. Once you start paying you can also compare your followers with any other account, ideal for competitor comparisons, analyze your own followers, but best of all for recruiters, sort followers. This means you can look at any of your dedicated accounts, filter the following and by relevance, location etc in spreadsheet format, perfect for sourcing. (You can see your competitors followers/follows in the same way.). If you are going to use twitter as a sourcing channel, it’s well worth the investment.

LocalFollow lets you conduct searches in 4 criteria:bio keyword, location,tweet content. It’s easy to find people, though the results page is a bit long-winded, and follow/listing is as simple as one click. It’s free to use, which adds to the appeal, but not as comprehensive as Followerwonk, but simple to use. You can use it to conduct searches or build lists or follows in the local areas you are recruiting in.

Tweetadder is a paid for application, but the best I’ve seen for building an automated following. At a once only payment of $155 for as many accounts as you want, it not expensive. Tweetadder lets you set your own searches for key-words being tweeted, using geekwords to build targeted followers. Theres lots of features for managing your account, that take the graft out of it. My preference is always for organic growth, but if you want a quick solution, this is probably the best. It will build followers and followings on as many accounts as you want, and the dedicated accounts give you the places to dig in to when you have opportunities.

This post is written for sourcing, not for engagement or relationship building. It is an approach that has been largely overlooked, and is less obvious. The applications take the time and effort out of list building or building following. It’s a simple tool kit that you can start using, if the time and noise factor has scared you off. I will be discussing this in more detail in a dedicated webinar for Recruiting Webinars on Recruiting Blogs on the 6’th March at 1.00 EST/6.00PM GMT. Follow me on twitter for the link to register, and you can catch the track in person at #truStockholm at the end of March.